After liberation, many Jewish survivors feared to return to their former homes because of the anti-Semitism that persisted in parts of Europe and the trauma they had suffered. Others who returned home feared for their lives. Jews already living in Palestine organized “illegal” immigration by ship, for those homeless Jews of central Europe to their homeland. British authorities intercepted and turned back most of these vessels, however. In 1947 the British forced the ship Exodus 1947, carrying 4,500 Holocaust survivors headed for Palestine, to return to Germany. Hopeless and destitute, thousands of devastated Jews were forced to continue the search for a way to rebuild their lives. 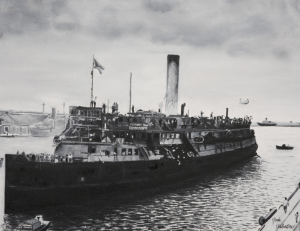